In August 2021, Martin Huber (52) and his wife celebrated their 20th wedding anniversary. Unfortunately, during their dinner, Martin’s fork fell out of his hand, and instead of explaining that he didn’t feel well, he managed only to mumble incoherently. An ambulance took Martin to the nearest hospital, where he was immediately diagnosed with a stroke.

Martin spent a week in the hospital’s neurology department before being transferred to a rehabilitation clinic. Luckily for him, he didn’t need surgery, but he was given medication to dissolve blood clots that were obstructing the blood flow to his brain. Without the ability to speak, with facial paralysis and an immobile left arm, Martin started rehabilitation and worked hard to gain at least some of his abilities back.

Today, Martin walks with a slight limp, his arm is partly immobile, and his speech is slow, and his life and the life of his family is largely affected by the stroke. His wife says he’s improving slowly but surely. However, she’s afraid that he will never be the same person he was before the stroke. But is this the best modern medicine can do? Isn’t there a better way to help our loved ones getting control of their life back after stroke?

All the above factors can lead to one of the different types of strokes:

When a stroke happens, think F.A.S.T.

It is essential to recognise the signs and symptoms of a stroke. Namely, the faster a person with a stroke receives medical attention, the better the chances of recovery are. The main symptoms can be remembered with the word FAST: 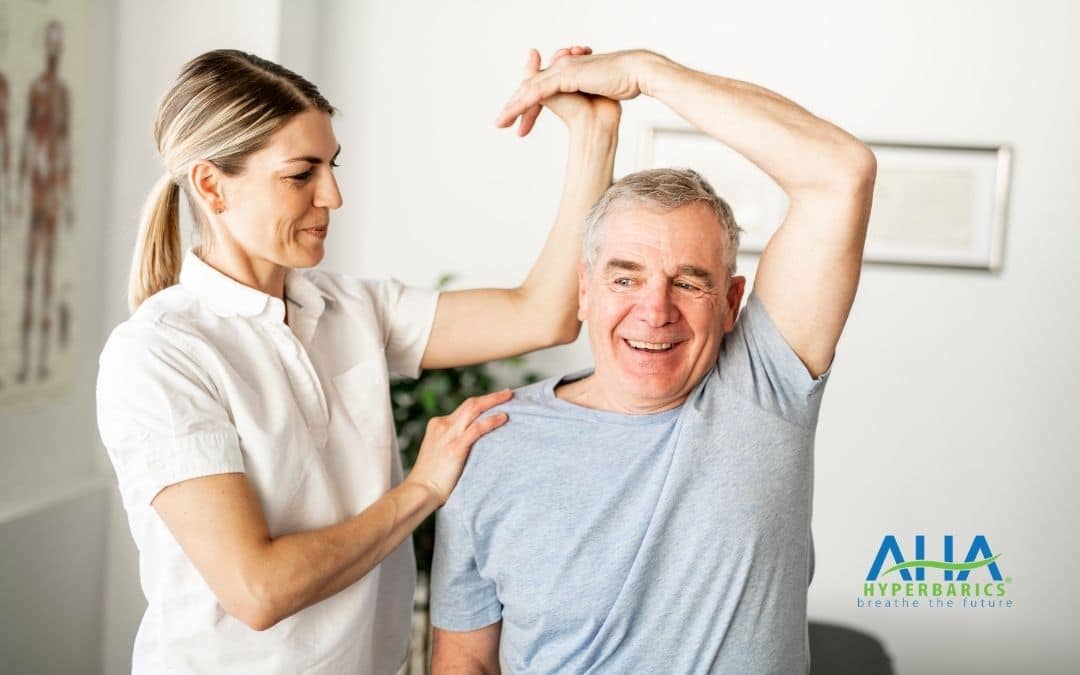 Raising their arms and holding them up is difficult or often impossible for patients, affected by a stroke.

After a stroke, some people require a long rehabilitation before recovering their former independence, including their physical and mental abilities. But some continue to depend on assistance with their daily activities, such as getting dressed, eating, walking or communicating.

They all help a person regain strength, mobility, and cognitive functions by focused repetitive practice. Patients need to relearn the skills they had before the stroke. But none of these methods is aimed at repairing the damaged brain itself.

However, there is a method of rehabilitation that does precisely that. AHA Flex V2 hyperbaric system is medically approved to effectively aid in the rehabilitation after cerebrovascular insult (CVI) – stroke. This particular hyperbaric chamber holds a certificate to prove its effectiveness regarding this and 6 other medical indications.

A retrospective analysis (1) was conducted on patients who were treated with HBOT for chronic stroke (>3 months) between 2008-2018. The study, which included 162 patients, showed that HBOT induces significant improvements in all brain functions including speaking, even if the stroke happened months ago.

The protocols used in these studies were similar: approximately 40 HBOT sessions at 2 ATA with 100% oxygen. AHA Flex V2 hyperbaric chamber is the only portable chamber in the world that operates at 2.0 ATA and can be used for the same protocols. Apart from that, it is available outside hospitals and is accessible to stroke-affected patients.

To prevent stroke, you have to eliminate the underlying risk factors. By attending hyperbaric treatments regularly, one can influence:

The effects of hyperbaric treatments are beneficial for overall health and well-being, so it is a fair assumption that regular treatments can substantially   lover stroke risk factors

There are over 12.2 million patients who suffer a stroke each year. Globally, one in four people over age 25 will have a stroke in their lifetime. (4), which means, that humanity has an obligation to find more effective treatments to help those affected by stroke and to work on preventative activities. AHA Flex V2 Hyperbaric chambers provided by AHA Hyperbarics GmbH, can do just that. Look for a complete AHA Medical Solution and increase your patient’s chances of full rehabilitation after stroke now. Don’t be like Martin from the beginning of our story, who underwent gruelling rehabilitation procedures instead of pain-free, simple and easy, medically approved AHA Hyperbarics oxygen treatments.