In beginning of June Mr. Peter Kokalj, general manager of AHA Hyperbarics visited Astana, beautiful city in Kazakhstan that was marking the 20th anniversary of its creation. Mr. Kokalj was invited to join the business delegation to attend the important International conference and Kazakh-Slovenian business forum. 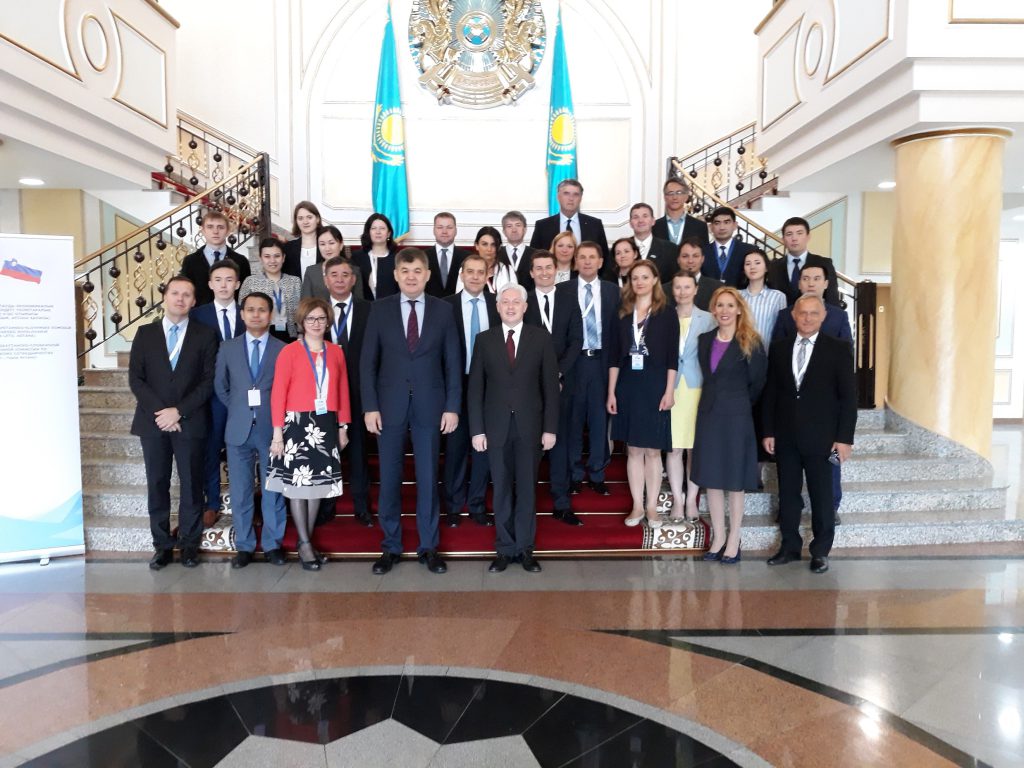 Joint intergovernmental commission of Slovenia and Kazakhstan with business delegation Business delegation in front of Ministry of Foreign Affairs of Kazakhstan

First day of the visit was dedicated to the meeting of the 4th joint intergovernmental commission of Slovenia and Kazakhstan and was followed by the International conference The City of Peace.

The members of the delegation attended the meeting of the joint intergovernmental commission presided by the Kazakh Minister of Health Mr. Yelzhan Birtanov and Mr. Iztok Mirošič, State Secretary at the Ministry of Foreign Affairs of the Republic of Slovenia. The meeting was followed by The City of Peace international conference at the famous Nazarbayev Center, organized to celebrate the 20th anniversary of Astana being proclaimed the capital of Kazakhstan. The guests were addressed by Mr. Kairat Abdrakhmanov, Minister of Foreign Affairs of the Republic of Kazakhstan, and Mr. Adilbek Zhaksybekov, Head of the Executive Office of the President of the Republic of Kazakhstan, and First Mayor of Astana. Mr. Kairat Abdrakhmanov stipulated some insights about Astana, the city that was presented to the world as the new capital city on 10th June 1998.

“Dejan Štancer, the president of the Kazakh-Slovenian Business Club (KSBC), provided insights into business opportunities in Kazakhstan. He said KSBC has gradually become the largest business club in the region and the regional representative of Kazakh Invest, the country’s national company for investment support and promotion, for central and south-eastern Europe.” More on link.

Later the same day, a reception was hosted by the Minister of Foreign Affairs of the Republic of Kazakhstan at the Astana Ballet Hall, which was followed by a gala dinner. Next day Mr. Kokalj attended the Kazakh-Slovenian business forum and presented AHA Hyperbarics production of most innovative medical product and benefits of hyperbaric oxygen treatment. In discussions he had later on with local business companies and public officers, he emphasized the possibilities of AHA Hyperbarics investing in Kazakhstan and starting a new production site.

The Kazakhs have given a lot of attention in AHA Hyperbarics systems made of best quality material and are extremely safe as they are made of three layers. Not only they are classified as medical products that can reach highest pressure among portable chambers, AHA Flex hyperbaric chambers are also outstanding as regards education and support to its customers. Mr. Kokalj has created a lot of interest in AHA Hyperbarics chambers and doing hyperbaric oxygen treatments (HBOT) for various purposes. So, you can read about hyperbaric chambers AHA Flex also on the most visited and influential Kazakhstan’s website of the Prime Minister.

More about the business forum can be found also here.

Thank you KSBC and SPIRIT Slovenia for inviting us into beautiful country of Kazakhstan and outstanding Astana, City of Peace.