Forever young – We can reverse aging with HBOT Is there a cure, a supplement, something that can reverse the aging?

As the journalist in the interview with Harvard social psychologist Ellen Langer is arguing: »if an antidote to aging existed, surely we would have heard about it by now. As for growing younger, entire industries are devoted to the appearance of youth but under the surface it would seem that time marches on.” The psychologist Ellen Langer is behind the famous “Counterclockwise” study. The researchers were studying how to find out how old people are, without asking them. “The only way to actually know someone’s age is to ask him or her. They decided to continue with the study, in which a control group of older men were told that they would attend a retreat where they would spend a week “reminiscing” about the past; the experimental group, by contrast, would spend a week surrounded by paraphernalia from twenty years earlier, listening to radio shows and discussing news from the period.” What happened after the study was surprising. People that came to the study depended on the aid of their children, were walking out without the help. Ellen Langer is arguing this is the effect of the mind »acting as if«. »The key is the human mind. « People suddenly saw themselves differently, as younger. And this then had an impact on them biologically. The study showed the power of possibilities. But what if we would have another possibility to reverse the aging?

The effectiveness of hyperbaric oxygen therapy on the disease, called aging

When we speak about aging, we do not speak only about wrinkles and gray hair. At certain point in our lives the organs start to decline in function. The heart needs to work harder to pump blood through stiffened blood vessels and arteries. Bones shrink in size and density; they are more susceptible to fracture. We are in fact shorter. The bladder becomes less elastic, which means that we need to urinate more. We start forgetting things. Our memory is not working as it has. Our skin is less elastic. Etc. We are getting older, if we want or not. But it would be great if we can renew the organ function, to memorize everything as we use to do, to fully live our lives and do all the things that we used to do.

Dr. Shai Efrati from Faculty of Medicine and Sagol School of Neuroscience from Israel explains how we can reverse the aging and rejuvenate.

Dr. Efrati is asking, how can a salamander grow another leg? With stem cells and supporting environment, t.i. oxygen., dr. Efrati says. Humans can do this by hyperbaric oxygen therapy (HBOT). In hyperbaric chamber we increase the blood concentration of the oxygen, the oxygen needed for the regenerative process.

“HBOT utilizes 100% oxygen in an environmental pressure higher than one absolute atmospheres (ATA) to enhance the amount of oxygen dissolved in body’s tissues.”1 Click here to read more about what is HBOT, how it works and what are the therapeutic effects.

There are many studies already published showing that we can improve the cognitive functions of humans with HBOT, now the researchers have also shown how to reverse two main indicators of biological aging with HBOT. The Israeli group of scientists from Tel Aviv University and The Sagol Center for Hyperbaric Medicine and Research at Shamir Medical Center have done the incredible thing, they reversed the aging with the simple non-invasive treatment, hyperbaric oxygen therapy. “Scientists have shown that this treatment was able to reverse two main indicators of biological aging – telomere shortening and accumulation of damaged senescent cells.” Until now we have only known that lifestyle factors may affect the health and lifespan of an individual by affecting telomere length. This is the first study ever that shows the effectiveness of hyperbaric oxygen therapy on the disease, called aging.

Telomeres are the specific DNA protein structures found at both ends for each chromosome. They protect the genome from nucleolytic degradation, unnecessary recombination, repair, and interchromosomal fusion. Telomers play a vital role in preserving information in our genome. Telomere length shortens with age. “Telomere length in humans seems to decrease at a rate of 24.8–27.7 base pairs per year. Telomere length, shorter than the average telomere length for a specific age group, has been associated with increased incidence of age-related diseases and/or decreased lifespan in humans. Telomere length is affected by a combination of factors including donor age, genetic, epigenetic make-up and environment, social and economic status, exercise, body weight, and smoking. Gender does not seem to have any significant effect on the rate of telomere loss. When telomere length reaches below a critical limit, the cells undergo senescence and/or apoptosis.”2   “Cell senescence is caused by the activation of cell cycle inhibition pathways induced by an accumulation of cellular damage, where cells permanently leave the cell cycle. Senescent cells undergo changes in cell morphology, transcription, protein homeostasis, metabolism and other characteristic alterations. At the same time, senescent cells are able to resist apoptosis and accumulate in multiple organs and tissues in vivo. Senescent cells are capable of activating inflammatory factor secretion pathways, generating local, non‑infectious inflammatory microenvironments within tissues, leading to organ degeneration and the development of aging‑associated diseases.”3

The study was done as a prospective clinical trial and is published in the peer-review journal Aging: Hyperbaric Oxygen Therapy Increases Telomere Length and Decreases Immunosenescence in Isolated Blood Cells: A Prospective Trial.
The study included normal aging population: 35 healthy adults aged 64 and older who did not undergo any lifestyle, diet or medication adjustments. The protocol was 60 HBOT treatments in 90 days (5 sessions per week) in a hyperbaric chamber that is compressed with air at 2.0 ATA including three air breaks during each session to utilize the hypertoxic paradox. The patients were breathing 100% pure oxygen for 90 minutes with 5-minute air breaks every 20 minutes. Compression and decompression rates were 1 meter per minute. The researchers were examining the blood of patients prior the sessions, after the 30th session, 60th session and two weeks after the last treatment. They were examining the peripheral blood mononuclear cells (PMBCs) telomere length and senescence. They both peaked at the 30th session, as researchers reported in their study. “At the cellular level, two key hallmarks of the aging process are: 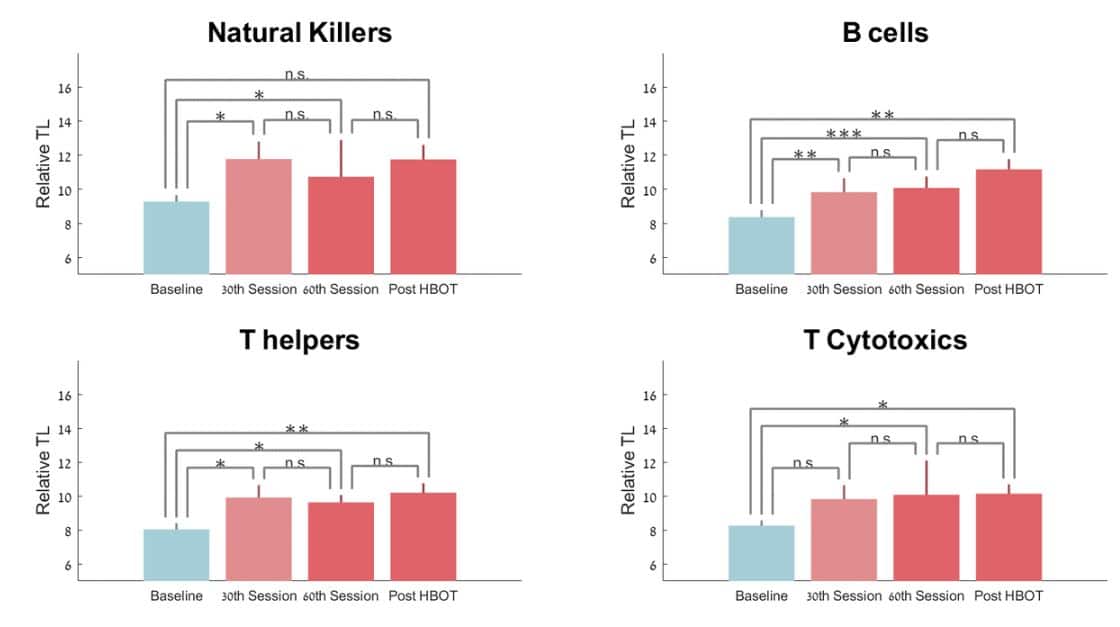 Dr. Amir Hadanny, co-author of the study explained: “What is remarkable to note in our study, is that in just three months of HBOT, we were able to achieve such significant telomere elongation – at rates far beyond any of the current available interventions or lifestyle modifications. With this pioneering study, we have opened a door for further research on the prolonged cellular impact of HBOT to reverse the aging process.”5 The study from Israeli researches is a breakthrough that opened a new grounding for researchers. Now can actually measure the effectiveness of HBOT on human body. The findings are bringing a new hope for us and offered a new prospective: we can live longer, healthier and more productive with hyperbaric oxygen therapy. As Dr. Efrati says, we need to start using it early, when we are still functioning, still have some tissues to repair. 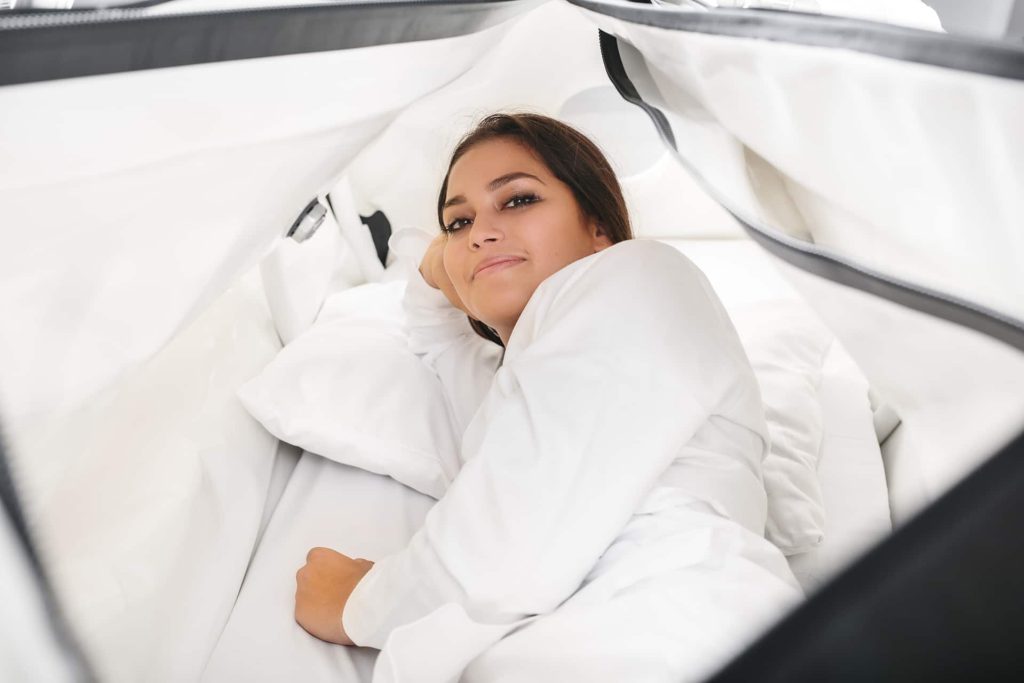 Although HBOT is not a miracle, we, at AHA Hyperbarics believe that HBOT is a way of life. In an AHA hyperbaric chamber at operating pressure of 2.0 ATA you can ensure yourself a very beneficial treatment and a healthier lifestyle.

You can read more about the published study in the following media: 1. German