AHA Flex V2 hyperbaric system can be use for medical purposes and conditions because:

It is certified according to the European Council Directive concerning medical devices MDD 93/42/EEC.

It is manufactured based on the quality management system in the production of medical products as determined by EN ISO 13485:2016.

For more than 200 years, the hyperbaric oxygen therapy has been used as a regenerative health treatment and has helped improve the overall well-being of people. Lack of oxygen is one of the most common reasons behind the appearance of numerous illnesses and cell damage.

The therapy is entirely natural and is carried out by exposing the patient to a pressure higher than the atmospheric pressure and supplying them with pure oxygen through special devices called hyperbaric chambers.

Hyperbaric oxygen therapy (HBOT) utilizes higher than normal (atmospheric) pressure. During therapy one does not breathe the usual 21% oxygen, but pure oxygen through an oxygen mask.

Hyperbaric therapy (HBOT) has been in use for many years already all over the world for preventing and improvement of many ailments and bettering general health. Any disease that is ischemic (lack of tissue Oxygen) in nature, or has a concurring edema (tissue or nerve swelling) will see a benefit from HBOT.

It is proven that the pressure inside a hyperbaric chamber has to be at least 160 kPa (1.6 bar, 1.6 ATA) in order to achieve the desired therapeutic effect. But only a handful of manufacturers on the market are able to produce equipment with such a high pressure. Our company has the knowledge required to achieve this high pressure. Using our own experience and development, we’ve managed to reach new dimensions within the field of hyperbaric medicine. We can proudly state that the AHA Hyperbarics® GmbH company is the European golden awarded manufacturer of innovative hyperbaric chambers, capable of operating at 200 kPa (2.0 bar, 2.0 ATA,15 psi) of pressure.

HBOT sessions are a safe, simple, non-invasive and painless treatment

It is extremely safe and has no side-effects, which would harm your health. Most patients find it pleasurable and relaxing. Treatments typically leave one with a sweet lingering sense of well-being.

HBOT helps improve your health condition, prolongs your life and makes it more comfortable and productive.

Beneficial hyperbaric therapy by means of pure oxygen supply regenerates damaged cells in a human body and prevents further damage from occurring. Users inhale larger quantities of oxygen due to being exposed to a high-pressure environment, which allows more oxygen to be distributed to the damaged tissue and this in turn leads to a quicker recovery. Physical properties of oxygen causes it to dissolve in plasma when exposed to high pressure. Consequently, plasma supplies all of the body’s tissues with oxygen, even tissue with poor blood circulation.

AHA Flex V2 hyperbaric systems are effectively being used for the following medical purposes and conditions:

The list of indications gets updated after each completed and certified research.

The AHA Hyperbaric systems are also effectively used for non-medical purposes, such as general health and well-being, beauty and sport. 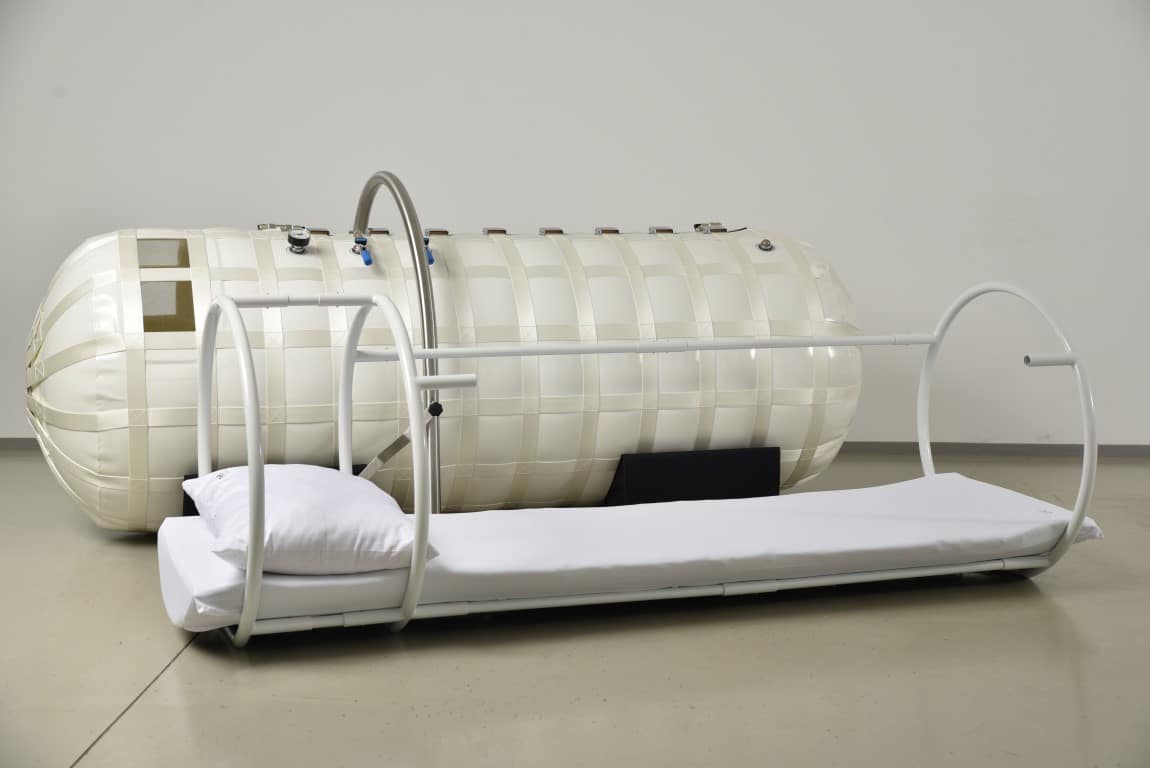 I feel great and I must say that I already have a feeling it is helping me, because even when I spend a long time on my feet the injured leg does not swell.

We’ve bought the AHA Flex 20 hyperbaric chamber. The chamber is made of high quality materials; every detail is well constructed. Because of the chamber’s white colour, it gives patients a feeling of space and security without causing claustrophobia. All of the conducted research, certificates and the chamber itself prove it’s reliable, safe and comfortable to use. At the same time all of our chamber operators appreciate the simplicity required for its operation, which allows them to pay full attention to the patient, making them feel safe during the procedure, so they can fully relax during their session inside the chamber.

Buyer of the AHA Flex system

A week before an important competition I visited the chamber regularly because of a torn tendon and a lot of pain. After a few therapies the mobility of my leg is normal and the pain has disappeared.

After using hyperbaric therapy my mood improved and I was full of energy. I felt rested and ready for new efforts.

I particularly recommend the therapy to top athletes, as I’m personally familiar with the importance of rest and recovery.

We have already completed a series of 20 treatments and we are fully satisfied. Our son didn’t have any issues the entire time he spent in the chamber. We have certainly noticed an improvement in his communication skills (increased range of his vocabulary, he is now forming longer sentences and is more frequently asking questions) and an improvement in social interaction (he now meets new friends and plays with them in the playground)

Parents of an autistic child

We're very pleased with our cooperation with the AHA Hyperbarics company. They have offered excellent support which included the installation of the AHA Flex hyperbaric system, whilst supplying professional training for its proper handling.

Buyer of the AHA Flex system